AirPlay, the future of home media streaming from your mobile device

Home / airplay / AirPlay, the future of home media streaming from your mobile device 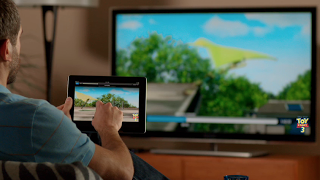 TV from your computer to your phone, wireless music across your home and movies from your mobile device to your TV. Discover how Apple’s AirPlay is quickly becoming the leader in wireless entertainment.

“Until now, streaming media to every room in your home either involved a serious outlay of cash or a viper’s nest of cables”

Wouldn’t it be great if you didn’t have to worry about which room you needed to be in in order to listen to music or enjoy a movie at home? Apple’s new AirPlay technology aims to provide its users with just that.

Until now, streaming media to every room in your home either involved a serious outlay of cash for an expensive system or a viper’s nest of cables strewn about your living space. AirPlay, by contrast, can harness devices you already own in order to achieve this and does so wirelessly, ridding you of trip hazards and unsightly connections between rooms.
It’s only Apple users that can benefit from AirPlay at the moment, however there are techniques and applications that will allow PC users into the ecosystem, and you’ll also need more than one Apple device to make it work.
The default use is streaming video from an Apple mobile device, like an iPhone or iPad, to the AppleTV that connects to your HDTV. The AppleTV costs a mere $99 and connects to your wireless network allowing you to send television shows, movies, music and even YouTube videos to your living room. You will also be able to send media from your computer to the AppleTV as well as your mobile device so, even if you don’t have a television in the room you are in, you can still access your full entertainment library for playback on the smaller screen.
To extend your streaming setup, however, you can also add further devices to the mix including wireless speakers that are compatible with AirPlay. These products range in price from less than a hundred dollars to the thousands so you’ll need to shop around and, if you’re lucky, some of your devices might even be compatible with AirPlay already. Companies like Marantz and Denon provide devices that work as a hub for your home media setup, connecting to your TV and stereo, and can be upgraded in order to work with AirPlay. If you own a device from one of these manufacturers it would be wise to check out their website to see if you are eligible for the upgrade.
Using AirPlay is the easiest part of the process, requiring a simple tap of your device’s screen to send media to another. For example, if you start watching a movie on your iPad and decide to finish watching it on the couch, you simply hit the AirPlay button and select AppleTV from the available list of devices. You are also able to send your photos and movies to your television in the same way. Ideal if you want to share events with friends and family.
To make things even easier, Apple provides a free app called Remote, available via its App Store, which works with the iPhone, iPad and iPod touch, and gives you access to all of your AirPlay-enabled devices as well as your iTunes library, giving you full control of your home network. From this app you can also send music to multiple speakers in your home, ideal for parties or if you’re moving between rooms frequently.
If you’re already an iPhone, iPad or iPod touch user and you want to take full advantage of the media streaming capabilities of your device, AirPlay is certainly something worth looking at. There’s no setup required, just a lot of fun to be had.
In order to make use of AirPlay you’ll need to have a wireless network in your home to connect your computer and mobile devices to. You’ll also need an Apple mobile device such as an iPhone, iPad or iPod touch. Additional devices include an AppleTV for streaming to your television and AirPlay-compatible wireless speakers.
Currently, Marantz, Denon, Phillips, Pioneer, Klipsch, iHome, JBL and Bowers & Wilkins offer AirPlay compatible speakers with more in the pipeline. The iHome iW1 looks set to be the most cost effective speaker system so far and includes rechargeable batteries so you can move it between rooms as needed.


Original article by Ben Harvell is a freelance writer and former editor of iCreate magazine. He writes for a wide range of international technology magazines and websites including Macworld, MacLife MacFormat and MacUser and blogs at benharvell.com. He has written a number of books covering Apple products with more on the way. Ben is also an avid Twitter user and would love you to follow him.