Mobile Gaming: The Choice Between Smartphones and Portable Consoles

Just today, it was announced you can even play ‘Angry Birds’ on Facebook.
“Gamer” used to be synonymous with a socially awkward adolescent boy who spent huge chunks of the day in front of the TV or computer screen.

Today, that definition has been blown right out of the water; games are now enjoyed by everyone, regardless of sex, age or background. How did that come about? It’s due in no small part to the unstoppable juggernaut that is the smartphone.

Smartphones have enjoyed a huge surge in popularity in the last two years, and are today’s must-have gadgets, offering a tantalizing wealth of features that help users stay connected to the rest of the world with the touch of a screen.

The ease and affordability at which smartphone games can be downloaded, as well as the casual nature of these games, make playing games on a smartphone a great entertainment option for those looking to enjoy a few minutes of light-hearted fun, whether they’re on the bus on the way home, or taking a break from the stress of a busy work day.

With smartphones being very much in the mainstream now, it’s no surprise that gaming has followed suit.

Some parties involved in the mobile gaming industry wonder whether the increased popularity of smartphone gaming is sounding the death knell for portable consoles. The top two portable consoles are the Nintendo DS and the Sony PlayStation Portable (PSP), and are, like their names suggest, handheld gaming consoles, designed and built for mobile gaming. 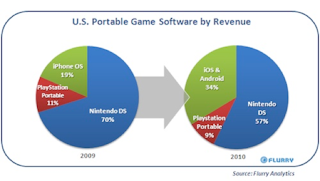 Statistics from Flurry, an analytics company that collects data from mobile devices, show that iOS and Android games (these being two of the most popular operating system for smartphones) have enjoyed a significant increase in sales from 2009 to 2010, going from a decent 19% to an amazing 34% of market share. This comes at the expense of the DS and the PSP – their sales dropped from 81% to 65% of market share in the same period.

At first glance, these figures seem to spell doom and destruction for portable consoles. However, any article that writes on the demise of the portable console being upon us should be treated as satire, because that is as far from the truth as it gets.

A comparison between smartphones and portable consoles would be like comparing apples and oranges: the two are designed with different purposes in mind.

The smartphone is a mobile device with multiple functions. You can make and receive calls, go online and surf, download and read an e-book, listen to your music collection, edit images or videos, and yes, it can also be used for gaming. It’s like a palm-sized, super-light computer with phone capabilities as well.

No one would buy a smartphone just for playing Angry Birds, but there are millions of people buying the DS and PSP just for playing games. Why? Because these machines were designed and built with the express purpose of offering the best in mobile gaming experience. One example of this would be the fact that the batteries of a portable console can last for at least a handful of hours when playing a very graphic-intensive game while the same cannot be said for smartphone batteries.

Smartphone games are casual games; users learn how to play the game within minutes. The ease with which a person can pick up the game and their affordability (usually $1-$3 to download) are the main reasons for their popularity. With so many people playing them, the names of the most popular games, like Angry Birds and Doodle Jump, have even entered the cultural vernacular. One drawback of the current crop of smartphone games is that, while the Top 20 or so most popular games offer a lot of quality and replay value, a majority of the games available for download, especially those who have no or few reviews, are not of the same caliber.

Games for the portable console on the other hand, often feel more finished, and less prone to crashing. Because portable consoles are dedicated mobile gaming devices, games created for them often feature superb graphics and more immersive gameplay. Flagship games like Super Mario, Dragon Quest and Gods of War, while not necessarily any more difficult to pick up then smartphone games, take longer to complete and thus require more of a time investment. They are also more expensive, by several magnitudes, with the average price being around $20-$40.

It is a bit unfair to compare the current crop of sophisticated smartphones with the DS and PS, portable consoles that are already at the end of their life cycles. It would be far more accurate to compare today’s smartphones with the next generation of portable consoles – namely, the Nintendo 3DS and Sony’s NextGeneration Portable (NGP or PSP2). The decrease in market share for portable consoles in the last two years could possibly be due to gamers holding onto their cash, wondering what the next generation of portable consoles will bring to the table and how they fare against the latest smartphones. The 3DS has already been launched in March this year, offering a 3D gaming experience which has received positive feedback from users; Nintendo has also announced that they will be adding a browser, app store and Netflix streaming sometime later this year as part of a system update. Sony’s PSP2, on the other hand, will be released in the fourth quarter of 2011 – many games are already drooling over its technical specs, widely deemed to be even more powerful than that of the 3DS’.

Smartphone gaming may have made more of a cultural impact and racked up some serious market share in the previous year, but portable consoles aren’t going anywhere, not when many still see them as having the edge when it comes to an all-around gaming experience. Both platforms have their own good and bad points – only continued innovation and competition will determine their prominence and validity in the mobile gaming market during the second half of 2011. The smartphone crowd might just be surprised by what the next-generation portable consoles have to offer.

Then again…who says you can’t have both?