The Coming of Social CEOs 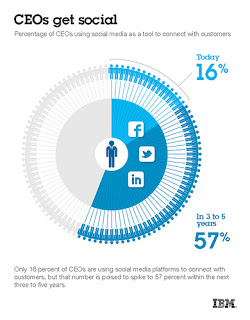 A new IBM (NYSE: IBM) study of more than 1,700 Chief Executive Officers from 64 countries and 18 industries worldwide revealed that CEOs are changing the nature of work by adding a powerful dose of openness, transparency and employee empowerment to the command-and-control ethos that has characterized the modern corporation.

When IBM conducted its study of 1709 CEOs around the world, they found only 16% of them participating in social media. But their analysis shows that the percentage will likely grow to 57% within 5 years. Why? because CEOs are beginning to recognize that using email and the phone to get the message out isn’t sufficient anymore.

The big takeaway:
That using social technologies to engage with customers, suppliers and employees will enable the organization to be more adaptive and agile.

“As CEOs ratchet up the level of openness within their organizations, they are developing collaborative environments where employees are encouraged to speak up, exercise personal initiative, connect with fellow collaborators, and innovate,” the IBM study concluded. Simply put, CEOs and their executives set the cultural tone for an organization. Through participation, they implicitly promote the use of social technologies.  That will make their organizations more competitive and better able to adapt to sudden market changes.

The IBM study shows that CEOs and the companies they manage must constantly evolve to stay competitive. Partners, suppliers, employees and customers want CEOs to communicate with them on a personal level to build trust and to help align them to the organization’s strategy. There is a lot at stake here.